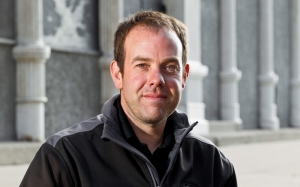 Few people are as passionate about cars as Colin Comer, a man who has certainly blurred the line between profession and obsession when it comes to his favorite subject. After spending the better part of two decades building a successful restoration business and collector car dealership, Comer found another passion in life- writing. After getting his first “gig” as a Contributing Editor to Sports Car Market magazine in 2004, Comer has gone on to write for just about every automotive publication there is. Today Comer is Editor-at-Large for both Sports Car Market and American Car Collector magazines, as well as being a Contributing Editor for Road & Track magazine, a Senior Editor at Vintage Motorsport magazine, and many others.

Playing on Comer’s well-known love of all things Shelby, Motorbooks next convinced him to write “The Complete Book of Shelby Automobiles,” released in 2009, then published in three languages to satisfy demand, becoming the best-selling Shelby book of all time as well as being the definitive guide to all things Shelby in the process. After multiple printings this title was updated and revised in 2014 and re-released again.

So it was only fitting that the right guy to write a book celebrating the 50th anniversary of the Shelby Cobra was Comer as well, the result being “Shelby Cobra Fifty Years,” which was called “The greatest car book of all time” by Esquire magazine. “Shelby Cobra Fifty Years” has also achieved worldwide acclaim, including being the 2011 International Automotive Media Bronze award winner,  and due to worldwide demand ended up being published in three languages. This legendary title has now been re-released as “Shelby Cobra: The Snake That Conquered The World.”

Comer co-authored “The All-American Muscle Car” along with the dream team of Randy Leffingwell, Joe Oldham, Jim Wangers and David Newhardt in 2013. This book celebrates fifty years of the muscle car from its birth in the 1960s to its resurrection of the 1980s through today.

For his fifth book Comer again gave us a milestone book on the cars near and dear to his heart- Shelby Mustangs. Originally published in 2014, “Shelby Mustang Fifty Years,” much like “Cobra Fifty Years,” is an insightful celebration of all fifty years of the Shelby Mustang along with the people that made it happen and continue to keep the legend going strong today. No Mustang or Shelby enthusiasts bookshelf will be complete without the original version of this epic work or even the updated and revised version entitled “Shelby Mustang: The Total Performance Pony Car” that launched in late-2019.

Comer’s always insightful, intelligent and witty prose comes from a wealth of firsthand experience of a lifetime spent not only studying cars but also being up to his elbows in grease restoring them. When not under the hood (or chained to a keyboard) Comer is also an accomplished racer that can be found driving said cars to the limit whenever he can. And that, folks, is the take-no-prisoners attitude combined with diligent research and fact-checking that makes Comer’s writing something that always raises the bar.

Colin, his wife and their two children reside in Milwaukee, Wisconsin, or, in Comer’s words, “fifty-two miles from Road America.”